As I’m sure we’re all aware today is Valentine’s Day. The day that is simply a hallmark holiday – making people in relationships spend lots of money, and making those are not in relationships feel miserable and alone.

L-whack and I are simply going to hang out and have a low key dinner at home – no bells and whistles for us – neither of us want that. We both think V-day is a load of bull shizz.

Last night I decided to bake some cookies – it’s a recipe I have used previously, but decided to vegan them up.

Chocolate Chip Star Cookies – but instead of used a heart shaped cutter. The original recipe is here and the vegan adapted version is below. I halved the recipe – L-whack and I are no good at portion control!


Now, when I made this last time (non-vegan) I was able to cut out heart shapes (awww how sweet!) but this mixture didn’t play nicely this time. My attempt at the heart is the top left cookie. Don’t laugh too hard. And when I put them in the container this morning to transport them – the heart fell apart. Hopefully not an omen for L-whack and I!!! HAHA!! 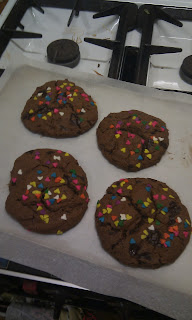 Ok, first up let’s get our head around the abbreviations.

All pretty important stuff. No one wants a broken heart!

ALA primarily functions as a precursor for the synthesis of EPA which in turn forms DHA[2].

Well, let me explain (as best as I can!)

The best way to get Omega 3 is by consuming oily fish or fish oil. And why is that? Because fish do not naturally create DHA – they actually eat microalgae (ALA) which is then converted by their bodies into EPA, which then soaks into their little fishy bodies (becoming DHA), that is processed into fish oil etc for human consumption.

But we vegans don’t consume fish or fish oil. So what is the next best way?

For a number of reasons, human bodies are not altogether efficient in converting ALA into its more useful derivatives, DHA and EPA. While ALA has good anti-inflammatory effects, it is not as protective or instrumental in our health as either EPA or DHA. Vegetarians, especially vegans, must rely on their bodies’ ability to convert ALA into EPA and DHA — which, as we’ve explained above, isn’t always efficient. Another consideration is that only about 10% of DHA gets “retroconverted” (back) to EPA in the body. All these factors keep EPA in especially short supply for strict vegetarians. [3]

So while flaxseed, walnuts, legumes etc are a good source of ALA – our bodies need to work really hard to convert this into EPA/DHA, and we therefore do not necessarily get the recommended amount of omega 3 as our non-vego friends.

So how much omega 3 is recommended each day?

For the adult population, the Heart Foundation recommends consuming about 500 milligrams of omega-3 (marine source) every day. On some days you may consume more or less omega-3s than on other days, but aim to consume about 3500 milligrams of EPA and DHA over the whole week[4].

I have bought a Deva Omega 3 supplement through iHerb – although each capsule has 200mg of DHA. So L-whack and I each take 2 capsules each day.

It doesn’t taste like much at all, they’re easy to swallow and only occasionally do I get a weird reflux taste. Hmmmmmm.

Does this all make sense?