I’ve had an unsettling morning.

I went to bed pissed off about a stupid comment one of my brothers made on my Facebook about shooting deer – in response to a sentence I wrote about deer little orphaned Lyndsay (pictured below) who passed away last week. Very immature and thoughtless bro. 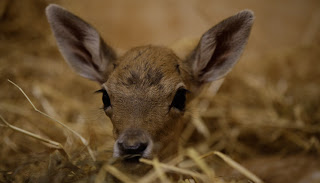 Then I woke up feeling ok (I had a BIZARRE dream involving the singer Pink???????) and got the train to work as usual.

I sat next to a girl, opposite her mum and sister. She was reading a magazine when she looked up and asked ‘how many centimetres are in 1.65m?’

The mum looked at her utter amusement, and the sister asked her whether she realised she has said that on the packed train, out loud!! I couldn’t help but giggle! It also made me feel better about making those kinds of remarks myself!!

But then I got to Southern Cross station, and in the forecourt they had a bunch of greyhounds there to promote that awful 'pink' campaign for racing. The poor greyhounds looked so scared being surrounded by hundreds of people rushing off to work. And they’re there promoting a double edged sword – animal cruelty AND gambling.

If I hadn’t been delayed (thanks Metro!) then I would have stopped and asked the various supporters of the campaign what happens to the greyhounds once they ‘resign’ or aren’t good enough for racing.

I got to work seething a little, but started seething more when I read the article about ANOTHER abattoir here in Australia (the ‘lucky’ country) being suspended due to cruelty. I haven’t watched the video, and I don’t want to – but I have once again signed the petition and have made another comment on Facebook for my friends (meat eating or other) to please at least sign the petition (if they want to eat meat, I respect their decision – but at least they should know where and how that meat came about).

To counteract an unsettling morning, I decided to do something to make it better. My brother (mentioned above) had his birthday last week, and is heading overseas next week. So as a birthday/farewell gift, I have made a donation to Edgar’s Mission on his behalf.

I want to end this post on a more positive note, so I will post a beautiful picture of Lyndsay and Honey (another resident at Edgar’s Mission) – apparently they formed an amazing bond during Lyndsay’s short stay, and Honey stayed with Lyndsay right up to the end. 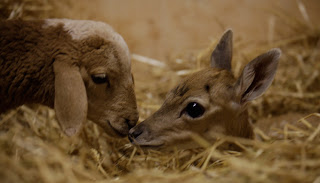