Yesterday I had THE most wonderful day with my gorgeous niece Z-monster! I treated her to a day at the zoo (I treated myself too!), and we had the perfect day together. I’m still grinning ear to ear!

I think the highlights for me were the following (it is hard to narrow down the list!);

How can you not love these little guys. They are so full of personality – I really wanted to keep one! Z-monster turned to me and told me that it probably wasn’t the best idea to take one home – haha!
Z-monster also decided that one of the little ones looked sad, so she decided that she would sing to him. I have an adorable video of her singing ‘A, B, C’ and what do you know – the moment she finished, this little guy jumped up and started running around – she’s a meerkat whisperer! 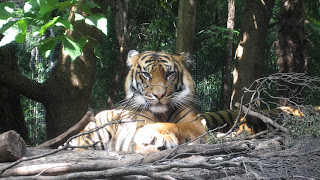 I think this picture says enough. It was so close (behind glass of course!) and was just happy staring at us. We both waved, and I was able to take this awesome shot! 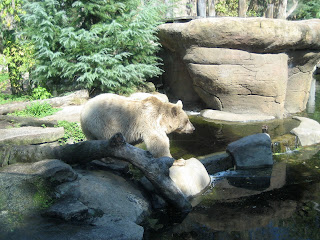 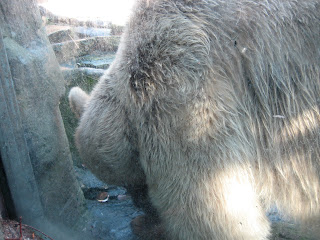 This guy is normally asleep in the corner, so it was a real treat for us to see him moving about. Not only was he moving about, but he was enjoying his lunch and we got a pretty close view of him. It’s the closest I’ll ever bee to a bear – and I’m ok with that!! 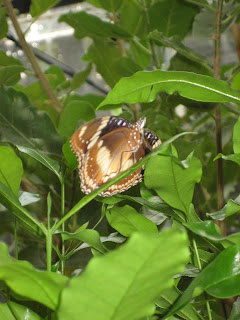 Z-monster LOVES butterflies. We spent a good 25-30 mins in da house (so warm!) and she refused to leave until one landed on her hand!! We waited and waited (I must admit, it tested my patience!) and literally as I turned around to look the other way, it happened!! She was sooooooooooooo excited and we had to call mummy straight away to tell her! It melted my heart to see her enthusiasm and excitement. Bliss! 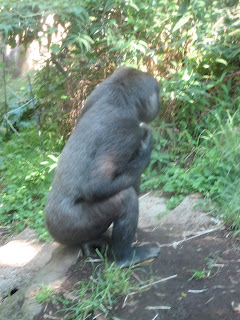 The coolest vegan in town.

Chillin’ with the roos 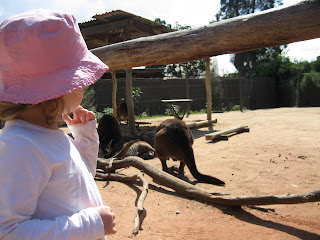 Being so close to native Aussie animals is always cool (even though the do occasionally hop down my dad’s street, it is always awesome to see them) The koalas were awake and munching on some lunch, and there was an active little echidna.

Other great things were the penguins (swimming about, peeping along), the spider monkey (the cutest little thing), posing seals, and Z-monster holding her nose and telling the elephants off for being so smelly! It was honestly one of the best zoo days I can remember, as we lucked out seeing the animals being active and comfortable

The weather was perfect, a little overcast but warm. We both wore our hats (I looked super daggy in mine, and I am proud of that). Z-monster was well behaved the whole day, and I treated her to a cute butterfly plate to take home at the end of the day. She chose a little butterfly spoon to take home to S-monster, who had been enjoying some time with mummy at home.

I don’t mean to blow my own trumpet, but I gotta say – I am pretty darn awesome!

Of course I am fully awesome in my own right (I had a little help from Vegan Dad), but I will claim all the awesomeness that I can!

On Saturday, I embarked on a hot cross bun journey to tastiness. Having worked as a ‘shop girl’ many moons ago at Bakers delight, I was scarred from having to bag 1000 hot x buns in one morning (yes, 1000 buns). Not just because of this though, I do not buy BD HCB. They just don’t taste great. But unfortunately there are not many options for vegan HCB, so I decided to try baking my own buns (hehehehe).

I read through the chosen recipe, noted that I had most ingredients but decided to get some bread flour. So I popped down to the supermarket, picked up some Simply No Knead wholemeal flour, and some currants and went home with the task of making some tasty hot x buns!

The recipe itself was super easy; it just took a bit more time that I thought it would. It took some time to zest the lemon/orange (we have a crappy old grater), grind the flaxseed, and I was running on slow-mode (and juggling two loads of washing!).

So this is the recipe I used – I have copied and pasted from Vegan Dad, and the slight changes I made I had added in (italics). I omitted the icing for the cross, and used another recipe (further down page).

METHOD
1. Mix sugar, soy milk, and yeast together in a large bowl. Let sit until yeast is hydrated (about 1 min for instant yeast, a few mins for active dry). Mix in sourdough starter (if you don't want to use the sourdough starter, just add 2 tbsp. of soy milk to the above amount and proceed forth).
2. In a separate small bowl, mix flax seed and water together. Let sit for 1 min to hydrate, then whisk until thickened. Whisk in orange juice, then add to soy milk mixture.
3. Add 3 1/2 cups of flour, spices, margarine, and zests and bring into a dough, adding more liquid or flour as needed. The dough should be firm but still tacky. Knead on a lightly floured surface (or in a stand mixer) for 5-8 mins, until smooth, kneading in the currants right at the end.
4. Place in an oiled bowl, turning dough to coat, cover, and let rise until doubled (1 to 1.5 hours).
5. Line a backing sheet with parchment paper. Divide the dough into 12 equal pieces (about 100g each), and shape into a ball. Place on prepared sheet and press down to flatten. Mist with oil, cover, and let rise until about doubled (30-45 mins). Preheat oven to 400.
6. Before baking, uncover and cut a shallow cross into the top of each bun with a razor blade or sharp knife. Brush with soy milk and bake for 15-17 mins, until a deep golden brown.
7. While buns are baking, bring glaze ingredients to bubbling over medium heat in a small saucepan. When buns come out of the oven, brush with glaze. Let sit for 1 min, then brush with glaze again. Let cool in the pan. The glaze is optional. It adds some sweetness, but also helps keep the buns fresh by sealing them off from the air.

We don’t own a pastry brush, so I just flicked some soy milk onto the unbaked buns – and then I used a plastic wooden spoon (??!) to drizzle on the glaze.

Now, between steps 5 and 6, I added a pastry cross based on this recipe, however I also added a teaspoon of caster sugar.

Put the flour in a bowl and rub in the margarine until it forms crumbs. Stir in cold water (teaspoon by teaspoon) until you can form a dough. Roll the pastry out thinly and cut into 24 strips. Place strips on buns just prior to baking in oven.

And there you go. As simple as that!

Oh man, I reeeeeeeeeeeeeally want one now…. Guess what I’ll be doing sometime this week!!
Posted by EssMick at 12:00 No comments:

Today we’ve got our first taste of what is to come for winter… yuck. As much as I love eating winter food (curries, soups, stews), wearing tracksuit pants and slippers, and curling up under my doona with the electric blanket on – I HATE THE COLD. It’s so depressing and it makes me want to jump on the first plane to Sunset Cove.

So instead of walking 10mins to get a really good coffee, I opted to stay more local (100m) and go to the café I used to frequent daily (that was until the 2 great barista’s left, the prices went up, and the new staff were rude to me not once, or twice – but three times!!)

So I walked in, and ordered a regular size soy cappuccino (take note). The barista (I use this term lightly) didn’t even look at me, instead checked his phone, grabbed a jug – at this point, I got distracted by the gorgeous black dog sitting outside (cuuuuuuuute!).

The thing that gave it away initially was the lack of chocolate powder on top – I MUST have this powder, it’s divine. Then I noticed the cup was larger than regular. Then I noticed the open bottle of dairy milk. And he gave me the wrong change. I’m no Einstein but I put 2+2 together.

Needless to say, I was reminded why I decided to go elsewhere for coffee. 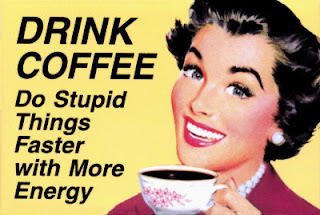 This weekend I plan on baking. I’ve decided to attempt baking my own hot x buns (having worked at Baker's Delight in ye olde days, I am scarred for life and cannot bring myself to buy them from there). I’ve found a few recipes that look good and fairly simple, so I shall give it a go. I am also dying to make Vegie Head’s Swiss chard and potato curry – although it depends on whether I can get my hands on some chard. I’m excited to be taking Z-monster to the zoo next week (am taking a day off) so I might bake a few treats for us to share.

It has been am emotionally draining week for me, so I’m planning on some down time over the weekend. I hope whatever you have planned for the weekend is great; and don’t forget it’s only a couple of weeks til the Easter long weekend!
Posted by EssMick at 12:48 4 comments:

This week has got to stop being sad.

Just over a year ago, my Nonno passed away. Today would have been his 99th birthday.

Nonno was a gentle, patient and caring man who never had a bad word to say about anyone. Although his English was extremely limited, and my Italian even worse – we still managed to communicate and we knew we loved one another without always having to say it.

He lived the anti-life of what is recommended – he regularly consumed red wine, refused to drink water (“fish piss in it”) and smoked 2 packs a day for 50 years. Yet, his health was excellent and it was only his age that eventually caught up to him. 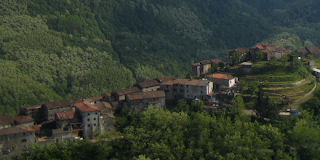 Nonno was born in a tiny hamlet in Tuscany, and came to Australia as a 15yo. During the Second World War he lived in an internment camp, as a cook, and that’s where he met Nonna. He was a fantastic sculpturer, and some of his work can be found in the Forum Theatre in Melbourne.

He made amazing gnocchi (which we just cannot replicate!), his pasta sauce was richly flavoursome and tomatoey, his potato chips crispy and herby, and his pizza was always delicious!

He always had a smile on his face, would often chuckle away to himself, and would often say things like ‘Oh boy’ and ‘not bad’ – particularly during family arguments!

I was glad to be able to spend quite a bit of time with him during his last few weeks, simply sitting with him in hospital, holding his hand and listening to classical music and opera – music that he loved.

Nonno left us peacefully, and without pain – and he is missed greatly.
Posted by EssMick at 10:46 No comments: