I hope you had a great weekend, I certainly did!

Friday after work, I went to a new gym. I got one of those scoopon deals for a gym closer to work (dang, no excuses now!) and tried it out. Pretty dodgy gym, but when you pay only $19 for 8 weeks – you can’t expect too much! They have those power plate things (which are a load of bull shizz – if you don’t know what it is, it’s a vibrating thing you stand on while do exercises and supposedly makes you burn more calories and ‘harden your core’ or some crap like that) but I decided to try it simply for the novelty factor. I did some squats on it, and that’s about it. There was a lady sitting on the other one – being that it vibrates, and she was in a public space - I thought that was a little…… inappropriate!

Anyways! On Saturday, I didn’t go to my normal gym (suspended that membership for the 8 weeks of scoopon gym) so instead did some cooking (yay!). I must say it was strange at first. It was the first time in about 3 years that I haven’t been to the gym on a Saturday morning – good and bad!

I decided to make some felafels again. Instead of hand squashing the chickpeas, I whacked all the ingredients in the food processor and whizzed them all together. So much easier. I put them on the baking sheet – they looked so much like cookies!

Baking them is so much healthier than deep-frying them, although admittedly not as tasty. These were still good, warmed slightly with either some sweet chilli and/or hummus.

Then from the wicked cookbook Appetite for Reduction, I made Classic Black Bean & Veggie Chilli – with a couple of changes. Instead of green capsicum, I used red. Instead of black beans (can you get them here?) I used red kidney beans and lentils. And instead of using a pound of zucchini, I only had ½ in the fridge so added some extra carrot.

Cooking the onion and capsicum together was so pretty. 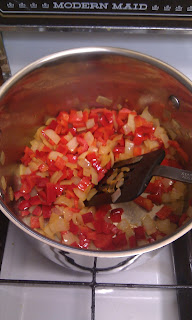 You pretty much throw all the ingredients together once you’ve sautéed the onion/capsicum and let it cook. It’s a SUPER easy recipe, and is oh so flavoursome.

L-whack and I enjoyed some last night for dinner, with some brown rice. Lucky guy has some leftover for his dinner tonight as well!

VERDICT: An excellent recipe. Super filling and super wholesome. Both L-whack and I agreed that perhaps next time I will omit the tomato paste as it was VERY tomatoey (the flavour had developed further overnight) and perhaps made slightly more cumin etc. to give it a deeper depth of yumminess. Highly recommended recipe though, will definitely be making it again.

On Sunday, L-whack had a craving for chips, so instead of going to buy some crappy deep-fried ones, he decided to cook up a storm (like Australia Day). 5 massive potatoes, 3 versions of chips (fat cut, thin discs, fries!) and a full stomach later – I was glad that I had gone to the gym! He did an excellent job, and I am glad that he had that craving!

To help the chips digest, we decided to check out the new Elwood foreshore, however we remembered that St Kilda festival was on, so instead we walked Albert Park Lake – not all the way, I had forgotten normal shoes and was only wearing thongs (flip flops) – but it was nice. We giggled at the swans diving for food, and enjoyed the stroll. The grand prix is coming up in a matter of weeks, and the track is coming along nicely. L-whack and I both enjoy formula 1 so it’s kinda nerdy and exciting for us. I must admit that every time I drive around the Lake (which isn’t often) I may or may not make car noises……….

I’ve pretty much gathered information for Omega 3, and was going to post today – but as this post is quite long now, I will leave it til tomorrow.