Did someone say Moroccan zucchini & chickpeas…

Last Friday, I decided it would be the opportune time to try one of the many recipes I have bookmarked in ‘Appetite for Reduction’. After peering into the fridge and figuring out which ingredients I actually had, I settled for Moroccan zucchini & chickpeas. It sounded like a well-rounded, healthy, simple recipe!

I did have to pop down to Safeway to get some fresh mint and another zucchini – I also bought a bottle of vino to assist in the cooking experience!

So I got home, tidied up the kitchen and prepared myself for vegan cooking goodness!

When I try a new recipe for the first time, I tend to follow it as is. After that, I like to add my own touches (if I feel that it needs it). Maybe extra spice, or extra vegetables. Depends on how it all turns out!

This recipe is very easy and simple, and doesn’t take much time. I had to google a few things as it’s an American recipe (we use grams, not ounces).

VERDICT: Overall a pretty good recipe. Both L-whack and I agreed that it lacked something though. Perhaps another spice or something to give it a bit more oomph. I’ll definitely try it again, but I would probably add more vegetables (maybe some pumpkin and green beans?), and perhaps leave the lid off for longer as I found it didn’t really thicken up. I served it with some brown rice (which worked really well as it soaked up a lot of the liquid) – I might try quinoa next time to mix it up? I’m not too familiar with Moroccan spices, so any suggestions as to what to add are welcomed. 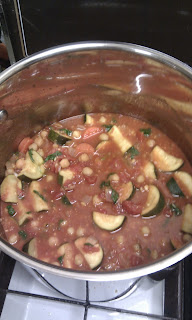 Yesterday, I did a FULL vegan day! Woot, go me!! I even resisted chocolate. Kind of. I bought some So Good chocolate bliss ice cream from Coles as it is on special this week – I must admit that it’s not bad. It’s not great, but it’s not as bad as I thought it might be. It still has that soy taste, but at the end of the day it’s not actually ice cream, it’s a substitute. My belly is feeling much more at ease with the less processed food, and no animals were harmed in the making of my food yesterday – so WIN for everyone!

Now, one of my concerns of becoming vegan is nutrition. Obviously health and well-being are essential and very important, and we need to get the correct nutrients into our bodies. As we do not consume animal products, then we have to get these nutrients from elsewhere. There is much confusion and conflicting information out there, that it’s pretty overwhelming.

After much googling, sifting through and reading pages of information, I think I have been able to narrow down the good information from the bad – and so I plan on sharing this with you. Stay tuned…
Posted by EssMick at 11:56