Oh boy, I’ve been lazy lately. Not without reason, but I just haven’t felt the urge to write a post in my blog… until now!! Perhaps it’s the cold, miserable winter we’re in the middle of experiencing; maybe the earthquake rattled a few things loose in my head (haha!) or it comes down to simply pure laziness and lack of motivation – not sure. But here is my latest post, and I promise it’s full of yumminess and hilarity!

Because the days are rolling into one at the moment, I can’t remember the order in which things went, so I’ll group this post into sections

Every so often, there’s a sign placed on the footpath on Clarendon Street in South Melbourne. I think it’s from a local business – it doesn’t seem to be selling anything, it’s just out there for a giggle. I’ve noticed on previous occasions its featured zombies. Well, this week it was different… 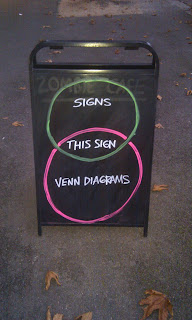 And on the other… 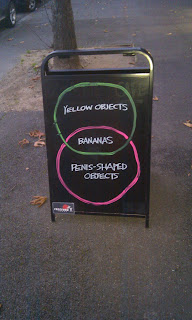 HAHA!! I was never good at maths, however for whatever reason, Venn diagrams stuck in my head.

As I mentioned earlier, Melbourne experienced an earthquake the other night. I was sitting on the floor in front of the heater, watching a DVD of Grey’s Anatomy when there was a strange noise and everything started shaking and rattling. At first, I honestly thought it was a possum on the roof (as this happens nightly) however it kept going and I thought the glass was actually going to break. Fortunately, on the earthquake scale it was minor and there was no serious damage or injuries reported. It is VERY rare for Melbourne to experience an earthquake, and I’d never experienced one before – and I have to admit I hope to not experience another. I cannot imagine the terror that people experienced in Japan, Italy, Turkey or Christchurch in recent times – again, another reason why I am so lucky to live in Australia. However, in true Aussie fashion, we took the piss out of it and some online pictures and references went viral.

I noticed this the following day…

Last night, my brother popped over briefly. We were chatting, when I went to the freezer to get a Tofutti Cutie (YUM!). He looked at me, and told me he thought I was vegan now and why was I eating ice cream. When I informed him it was soy/tofu ice cream, his face crumpled up in minor disgust and he went quiet. I asked him if he wanted a bite to try – he ummed and ahhed, then said ok. He took a tentative bite, chewed then looked surprised. “Hey, that’s really quite good”, and proceeded to accept my offer of a whole one to himself – BAHAHAHA!! There is no chance of him ever becoming vegan (he had actually just come from a sausage tasting thing – yuck) but it’s another small win for vegans!! 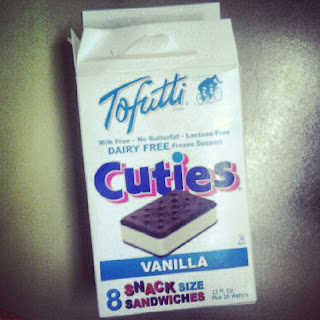 I’ve been doing quite a bit of cooking lately – this weather deserves comfort foods like stews and soups, so I have made some yumminess.


A super easy, super tasty recipe from Vegie Head. Get on it! It’s so good, that even L-whack (who as a PhD candidate who has not time) has asked me to show him how to cook it!! 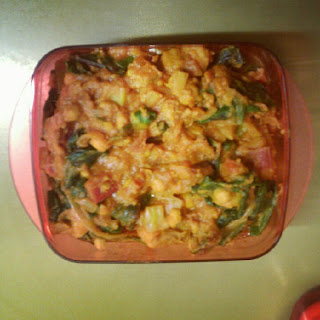 And with a few changes because I didn’t have the right ingredients. Instead of sweet potato (kumara) I used normal potato, and instead of baby spinach I used a bunch of rainbow chard.

An EssMick original recipe... haha!! I don’t really know what I did, or how much of stuff I added but it turned out tasty. 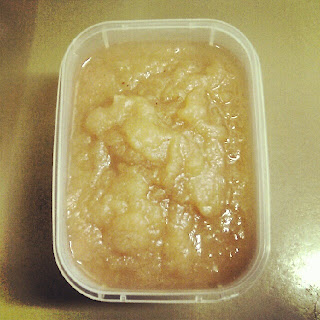 Place all ingredients in a saucepan and simmer for 25 minutes, stirring occasionally. Eat!

My next blog will be about my mis-adventures with filo pastry… an entertaining and amusing evening for me whilst I was trying to be brave and use pastry for the first time…
Posted by EssMick at 12:03